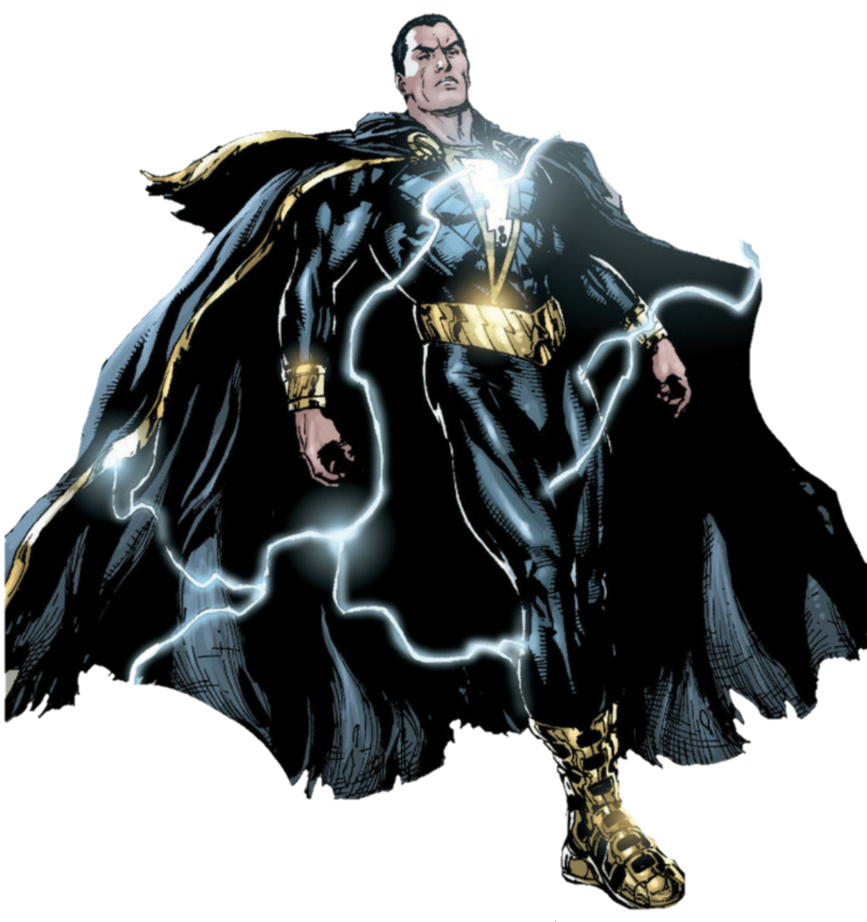 🗲
Respect Black Adam
Black Adam is a DC Comics Character.
Shitpost to novella. Long term pref.
Story-based T1, dice. Muse is fickle at times.
Best viewed in 1920 x 1080
Profile by FrostHubs
The man in the middle is the knave who blanks out the truth in order to pretend that no choice or values exist, who is willing to sit out the course of any battle, willing to cash in on the blood of the innocent or to crawl on his belly to the guilty, who dispenses justice by condemning both the robber and the robbed to jail, who solves conflicts by ordering the thinker and the fool to meet each other halfway.

Power of the Egyptian Pantheon

Black Adam is gifted with a panoply of powers that appear to correspond to and match, if not exceed, those of Captain Marvel. Essentially, he is gifted with six attributes of particular gods who are exemplars of them. He is as strong, fast, durable, powerful, knowing, and as possessed of inner strength as six gods who are pinnacles of those qualities. These powers are both magical and divine in nature.

The chief distinction between the power of Captain Marvel and that of Black Adam is that Adam's powers are provided by the Egyptian, rather than the Greek, pantheon. Presumably, the two are nearly equal in power, though it is conceivable that one god might be more potent than another (an interesting note is that Solomon, Achilles, and Hercules - three of Marvel's patrons, were originally at least half mortal). Moreover, Adam has had centuries more experience with his powers than most super-beings, and is an accomplished and iron-willed combatant even without his powers.

S for the Stamina of Shu

Using Shu's endurance, Black Adam can withstand and survive most types of extreme physical assaults. Additionally, he does not need to eat or breathe and can survive unaided in space. He is impervious to bullets and all known man-made weaponry, leaving only beings of sufficient strength or magical weapons to harm him.

Shrugged off a blow from an enraged Superman
Shrugged off Power Girl's heat vision
Laughed off Dr. Fate's magical lightning
Fought off the entire JSA, Doom Patrol, and Teen Titans

H for the Swiftness of Horus

Horus' speed allows Black Adam to move, think, and react at speeds greater than FTL. His speed grants him the illusion of short distance teleportation when in combat. Horus' also grants Adam the ability of flight.

Ambushed and Blitzed the entire Marvel Family before they realized what happened.
Jason Garrick had to exert himself to keep up with a relaxed Adam.


A for the Strength of Amon

Black Adam has phenomenal levels of super strength that rank him as one of the strongest beings on Earth, able to effortlessly shatter mountains, punch through forcefields and lift massive objects with little difficulty. Black Adam's strength is enough that he can at least lift and throw 100 tons over several miles while in a weakened state. The true depth of his strength has never been seen, as he can call upon Amon to grant him 'everything'.

Z for the Wisdom of Zehuti

Black Adam has instant access to a vast level of scholarly knowledge. The wisdom of Zehuti also gives Black Adam clairvoyance and provides him with counsel and advice in times of need. It also blesses him with Eidetic Memory, superb tactics of war, and extensive knowledge of mathematics.

A for the Power of Aton

Aton's power, besides fueling the magic thunderbolt that transforms Black Adam, also enhances his other physical abilities and allows for inter-dimensional travel. Adam is capable of creating magical lightning from his body, primarily from his hands, and use the energy to attack foes. In addition, the 'Shazam' thunderbolt produced by Aton can be dodged and used to strike opponents, normally obliterating them. Aton's magics also allow him access to the Rock of Eternity.

M for the Courage of Mihos

This aspect is physical and partly psychological, and gives Black Adam superhuman amounts of inner strength to draw off from, while also making him indestructible to harm like the great lion itself. Maahes blesses Adam with several favors, namely being accelerated healing through the use of his lightning, an incredible amount of willpower that grants him perseverance in overwhelming odds, and great resistance to telepathic intrusions and mind control. Adam's Divine Grace grants him extraordinary luck and guidance that allows finesse in all actions. Finally, immortality is his for as long as he remains in his empowered form.

Black Adam is a being with very little in the way of weaknesses. At times, his arrogance can get the better of him, but it is rare for his powers not being able to back up his talk. Though he boasts strong resistence to magic in general, divine magic and the mystic abilities of the Spectre are capable of harming him. Wonder Woman's lasso can compell him to say his magic word, and should he lose the ability to speak, he cannot transform into his empowered state.

Current and Past Roleplay

Black Adam has recently taken up Guardianship in another Nexus World of sorts, and has come across many familiar faces.

Discovered a foreign power trying to disrupt Kahndaq by attempting to incite revolt; it was crushed.

Adam has taken to exploring the Andromeda Galaxy of his world in an attempt to find a particular item.

Black Adam fought a strange spiky haired Saiyan to a stand still when his ability to traverse dimensions deposited him within the Hyperbolic Time Chamber.

After finally hunting down the whereabouts of the Amulet of ISIS, Adam killed the thieves and destroyed their organization down to the last person.

Mary Batson came to him to request access to his powers. Failing the test Adam presented, she was sent away.

Black Adam has been searching for a way to access the Rock of Eternity once more to confront the Wizard, Shazam.

If there's one aspect of his personality that Black Adam is famous for, it's his arrogance. This reputation is not entirely undeserved. Black Adam is quite arrogant, haughty and dismissive of all but the most powerful of threats. Adam is also quite educated and worldly and the additional wisdom of Zehuti grants him considerable intelligence and cunning. He houses within a terrible rage, but the full extent of that has only ever been seen once, when his original family was murdered by the four horsemen of the apocalypse. Despite this, he's been shown to be kind in a way, and absolutely intolerable of slavery.

He is, however, somewhat xenophobic. As the sovereign of Kahndaq, Black Adam tends to place the needs of his people and his nation above everything else, and does not concern himself with worldwide threats until those threats pose harm to Kahndaq. He is no diplomat, distrusting politicians and ambassadors, and as a result his country is largely isolationist in policy. Although not known for his natural charm, Black Adam has an aura of authority and leadership about him. He leads by example, and is always at the front of a charge. He truly cares for those under his command, and his followers are to a man unswervingly loyal to him. Black Adam's bearing is forceful, even regal, and he tends to float just above the ground whenever speaking. His eyes gaze upon most people with a disdainful, and he is coldly reserved to those he does not believe he should be even talking to. Indeed, he is the sort of man who does not even need to raise his fists to achieve victory; He's one of those people who can wither you with a look; who can make you feel like you're lower than dirt without even touching you. He does not take 'insolence' lightly, and has no notion of mercy in regards to the guilty - criminals are to be executed, not rehabilitated.

Black Adam is formidable and statuesque. He has an incredibly gifted physique, a square chin, and a chiseled, handsome face. His hair is short and black, while his brown eyes are deep and dark, seeming to draw in the object of their attention. He is a man who could truly be described as tall, dark, and handsome, with the only thing that takes away from his good looks being his cold expression and arrogant demeanor. He has no known scars. One unusual and distinctive feature about Black Adam are his ears – pointed like an elves’, they are extremely distinctive, and quite unmistakable. Though Black Adam very rarely needs or wishes to travel incognito, if and when he were to do so his ears would be by far his biggest giveaway.

Adam's scent is a rich, warm aroma with hints of wood and earth. Occasionally this is marred by ozone.

Black Adam's lightning is cobalt, but changes color to gold when letting loose.

Carries around Isis' Amulet often, kept secure and hidden beneath his attire.

Adam has taught several beings how to fight, most notably Superwoman.

Black Adam tends to be ruthless, even when trying to be a 'hero', because his source of wisdom is oriented toward deciding whether someone deserves life or death.

The lightning that discharges from his body coincides with his mood; the more vicious and chaotic it appears, the worse his mood is.

As vicious and intimidating Adam is, he made a promise to someone that he would never harm another child.

Adam desires to speak with the Wizard and inevitably take his place, but such a goal has become secondary.

While he loses no sleep over the atrocities he has committed, he remembers the face of every person he has ever killed and holds responsibility for his actions.

Black Adam is in constant contact with the Gods who provide him their power, often consulting them for advice -- or listening to their quips about those he interacts with.